Nowadays, the catchphrase seems very often to be “minority issues”. It’s Us vs Them. A tiny minority fighting against the overwhelming majority. If you are not out, you must be in. And as queer Asian women, it feels like we are a minority of a minority of a minority. But I think this dichotomy of classification is too limiting. I propose we look at it from the perspective of “differences”. Differences which are to be accepted and respected.

Because while being a lesbian makes me part of a “minority” group, cut society along other lines, and I become part of the majority (because I’m Chinese). Cut it yet another way, and I’m in the minority again; (my flat isn’t an HDB one, and the government will never construct a covered walkway from my block to the bus-stop). Hence I think this way of defining society by polarizing it oversimplifies things. I prefer to think of people like a Venn diagram, which uses circles to represent different sets and the overlapping portions to define shared areas of the different sets. My circle will partly overlap the circles of other people who have some common traits, but their own circles will also overlap yet others with whom I have nothing in common, and there will be parts of my circle not overlapped at all perhaps because I haven’t yet met anyone who shares those traits with me.

Therefore with this illustration, it’s easier and fairer to think in terms of Differences. I think that differences should be expected as the norm, rather than an exception. After all we are not gingerbreadmen who came from the same cookie-cutter.

I have an issue with minority.

I have an issue with token of appreciation.

I am sure that I am appreciated sometimes – if only because I am a token.

In a man’s world, I am the token woman.

In a straight woman’s space, I am the token lesbian.

Now, I am sure all of the above are not unfamiliar to most of you, but wait – there is more.

In a room of lesbians, I am the token leather dyke.

Politically, more often than not, I am the token Indian lesbian carrying the minority of minority placard – alone.

Signs that you are a token:

1. When you are in the group yet not connecting with anyone, made worse by intentional alienation. Imagine everyone else speaking in a different language, one I do not understand even though all of us are fluent in English. 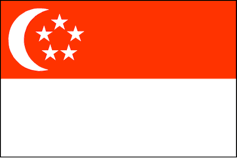 My first memories of National Day have always been the school celebrations, whereby we learnt to sing community songs a few weeks before the celebration. The schools in Singapore usually have the celebration one day before National Day, and we would watch the performances put up by our peers, and wave little Singapore flags. At the end of the day, we would go home with files or pens with the words ‘Happy National Day’ on them.

I never had the chance to watch the National Day Parade up close, partly because my parents were never enthusiastic about the idea. It is also partly because the tickets used to be much coveted items, which people queued up for days to obtain. However, watching the National Day Parade on television was a grand event. As a young child, I used to watch it earnestly with my cousins, and of course our favourite programme was the fireworks display, and sometimes we can see the display right outside the windows, much to our excitement.

As I grew older, the novelty of celebrating National Day wore off. However, I still have the amusing habit of counting the flags that are hung inverted, on the exterior walls of HDB flats.

Everything was simple and pretty when I was a child. I knew that I was born in a country that is ‘prosperous and flourishing’. I was promised of a bright future if I ‘study hard’. It seemed that every Singaporean has an equal opportunity to succeed in life. It seemed that nobody would be left behind. It did not take long for me to be disillusioned though.

I live in a country where the state believes they have the right to decide whether people should be digits, or creative or entrepreneurial.

I live in a country where the ministers claim that the ruling party’s majority votes means “the people want to be led.” (Dr Wang Kai Yuen, ST, April 4 2002) I live in a country where before the general elections, the ruling party redraws constituency boundaries to have more walkovers, bankrupts opposition politicians and castrates the national press while its ministers tell everyone to speak up, not to fear being “hit by a big stick” (Raymond Lim, ST, April 4 2002). This is safe because the people who spoke up before MPs encouraged them to are either overseas, silenced or dead.

I live in a country where the ministers who determine the political process are paid private-sector salaries. There are few other reasons to join the ruling party, so certified talents are worth their price.

I live in a country where the state announces that we must have a vibrant arts scene. So they build the Esplanade which is too big for most local performance groups. On National Day they say that promoting the arts is another way to attract more tourists to this ‘global hubcity’; they do not even pretend that pandering to foreign money is less important than giving citizens an awareness of their own country’s culture.

I live in a country where the front shelves of bookshops are crowded with one man’s words. Until recently, anything that disagrees these words could only be found in Select Books (Tanglin Shopping Centre) or overseas.

I live in a country where my parents have friends who were tortured by the Internal Security Department. So for them and others, an 18-year-old girl talking to the press about politics will never be seen as invulnerable. An 18-year-old girl who comments on a minister in an newspaper interview will be told she could cause someone in MOE to lose their job.

I live in a country where the national paper will announce that a poem has won a foreign prize, but they will not willingly add (until much later) that it is written from a lesbian perspective. What the paper’s employees think of homosexuality and its criminalisation has nothing to do with this.

I live in a country where the state makes its arguments too simple. Such as: the PAP = the country. Such as: democracy = protests = violence = disorder = national disaster. Such as: human rights = confusing Western concept that our people don’t need to learn very much about. Such as: history = one man’s story. Such as: Chia Thye Poh = opposition = Marxist = dangerous = 32 years of imprisonment = non-existence in the authorised history.

I live in a country with a population that is constantly hit by men in white with invisible and visible sticks. I live in a country where it is hard to expect people to value anything more than protecting themselves from these big sticks, or getting your own stick and white uniform.

Add new comment
Giving thanks… is not something i am apt at, when things are not going my way.’

I have been pretty blue of late.
It’s the uncertainties of my career path, being a fresh graduate and all.
My dreams of pursuing post-graduate studies; my desire for self-maintenance… together with the long wait for application results, gave me new anxieties with a measure i have never experienced.

It’s amazing that when you wish to support yourself, the things that push your buttons look different.’ Repairs for a laptop with a faulty cooling system would cost about $100- $200. New eyewear would need another $200. Taking GRE would take another few hundred; not to mention that with each school that you apply for, you would pay USD 100.

And i have yet to be gainfully employed.

So, for weeks, i have been walking around the house a little blue. I became oblivious to many things because my mind has taken on only one track- getting employed. My friends whom i used to talk to, for whom I used to be there for, i have neglected. Partly because of the faulty laptop; partly because i lacked the capacity to be there for them.
“If i cannot get myself out of this, what value does my encouragement hold?”