The LGBTIQ People's Caucus in Cambodia has issued the following statement, also endorsed by Sayoni, calling for sexual orientation and gender identity to be included in the ASEAN Human Rights Declaration.

The second convening of the ASEAN Lesbian, Gay, Bisexual, Transgender, Intersex and Queer (LGBTIQ) People’s Caucus at Phnom Penh, Cambodia was not only to celebrate diversity but moreso, to remind the governments and members of civil society that the recognition, promotion and protection of LGBTIQ rights are still long overdue.

For the second year, issues pertaining to sexual orientation and gender identity (SOGI) have been given equal priority and attention as other struggles and issues at the ASEAN Civil Society Conference/ASEAN People’s Forum (ACSC/APF). While we appreciate the long overdue acknowledgement and opportunity, we need the ACSC/APF to do more than just lip-service.

During the 8th ACSC/APF in Jakarta, Indonesia, the LGBTIQ caucus explicitly made visible the violations of human rights and the corresponding emotional and psychological impacts to the lives of ASEAN LGBTIQ persons. Hence, we are incensed and extremely disappointed by the exclusion of SOGI in the draft of the ASEAN’s Human Rights Declaration, which is a blatant manifestation of discrimination against LGBTIQ persons.

Across the ASEAN region, LGBTIQ persons are either treated as second class citizens, criminals, are seen as deviants, and in some cases are not even recognized as human beings. We are made to lead dual lives and be ashamed of ourselves for who we are. We are subjected to name calling, condemnation, taunts, reparative treatments and other inhumane abuses. Discrimination and violence come not only from our families, friends, communities, and employers but also from state institution such as state actors, especially police and religious officers. Even in the face of discrimination and violence, the governments refuse to protect our basic human rights.

In Brunei, Burma, Malaysia and Singapore colonial laws that criminalize SOGI are used to harass, extort money and demand sexual favours, arrest, detain and persecute LGBTIQ persons. In the Philippines and Indonesia, anti-trafficking or pornographic laws are used to conduct illegal raids at gay establishments and detain LGBTIQ people. The anti-kidnapping law in the Philippines is used to forcibly break apart lesbian couples in legitimate and consensual relationships. In Cambodia, a lesbian was imprisoned following a homophobic complaint by the family of her partner because of their relationship. In Thailand, the negligence of the state is clearly manifested in the refusal to investigate the killings of fifteen lesbians and gender-variant women. The existence of the pornographic law in Indonesia, which haphazardly included SOGI as pornography, is used by several internet providers to block websites of legitimate LGBTIQ organization such as the International Gay Lesbian Human Rights Commission (IGHLRC) and the International Lesbian, Gay, Bisexual, Transgender and Intersex Association (ILGA) websites. In Malaysia, Seksualiti Merdeka, an annual sexuality festival was disrupted and banned by the police as the festival was deemed a “threat to national security”.

Basic human rights, such as right to healthcare, housing and education, are denied on the basis our SOGI . This has contributed to the steep rise in HIV infection amongst most at risk populations: men who have sex with men and transgendered people. Archaic laws that criminalize SOGI makes it even more difficult in implementing life-saving interventions to at-risk groups.

Even with all the hurdles and challenges faced by the LGBTIQ movement in Asia, our numbers and strength has been steadily growing. We have come at the stage in our struggle for equality and respect that we will never accept discrimination, abuse and violence a part of our existence by the denial of our rights and our humanity.

It is in this spirit of pride and dignity that we are reclaiming our rightful space in our respective countries and in our region, and demand our governments to: 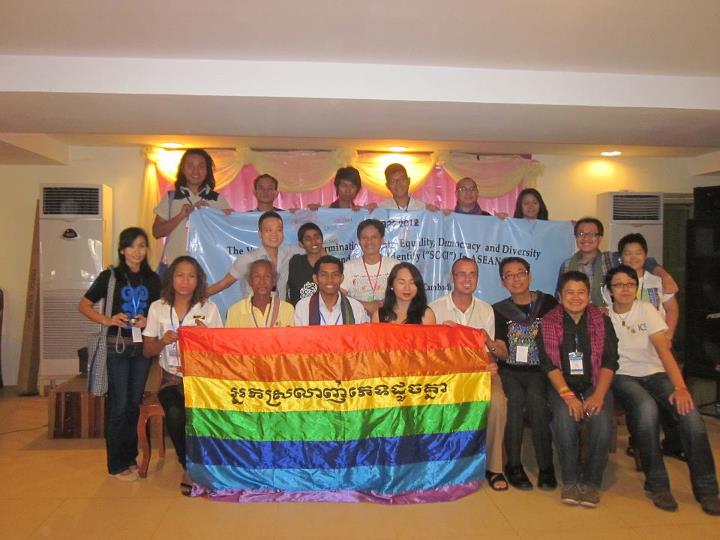