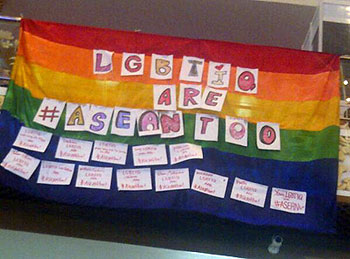 
Amid all these voices, the ASEAN SOGIE Caucus, a group of activists in ASEAN, seeks to give sexual orientation, gender identity and expression a place in the conversation.

This task is often a challenging one.

Throughout the plenary sessions, the question of if and when the ASEAN Human Rights Declaration will include provisions protecting the rights of LGBTIQ people remained unanswered.

[...] During a discussion on minority women’s groups, the issue of including LBTQ women’s issues under this umbrella was raised. The panel responded with consensus that LGBTIQ issues are too contentious for the women’s movement to support on the ASEAN platform and should be pursued and raised by the individual groups.

But it is extremely important that we represent SOGIE/LGBT issues at the conference. Here are some highlights from Day 1.