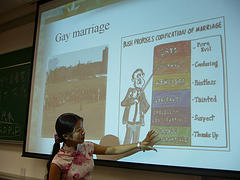 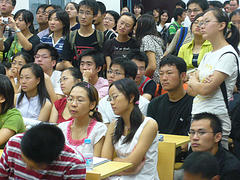 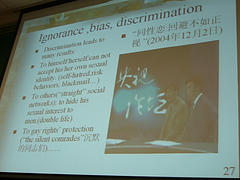 About a couple of months before I entered Fudan University in Shanghai, I received the news that it was going to offer undergraduates an optional course in homosexual studies. I am going to take that module, and maybe even excel in it, I thought. Ha, fat chance.

The module had an intake of 100 students, and over a thousand students were vying for those sacred places. First-year students didn't even have a chance, actually. Students had to save seats for themselves from lunchtime till when the class starts at 6.30pm. About an hour before class starts, many students are already inside the classroom to secure their seats, by 6pm the classroom is filled with people standing around waiting for the excitement to begin and cameras take their positions as well. Many people from outside the campus join the crowd too, and it was virtually impossible to even get a glimpse of the head of the guest speaker by 6.30pm from the doors and windows of the classroom.

The course was conducted mainly by different guest speakers every week, who touched on issues such as homosexual sex affairs like money boys, and on more serious concerns like discrimination they personally have faced. I myself only attended one lecture on lesbians and many people have walked out of that classroom more informed, acquainted and eager to find out more.

Even after so many years since the Cultural Revolution, the topic of sex seems to be frowned upon in China's society today, let alone sexual orientation, which stems from sex. One needs lots of courage to talk about such questions, especially since many people will try to shush you. Thinking that the students in Fudan are all liberal and matured, I did approach this girl during one of our initial orientation group gatherings and asked whether her roommates were gay (I tried to ask her in an indirect way but she didn't get it, so I kept trying to get to the word but never said it outright). She totally laughed it off and said that her roommate was just a tomboy and not what I thought. Then she went on to say although they went through the Cultural Revolution, their thinking certainly didn't.

The students here in general, though more so for girls than guys, link arms and hold hands (clasped even, sometimes) all the time, as a form of camaraderie. I didn’t feel too comfortable when local friends started to link arms with me or became a tad too touchy-feely with me. I grew to accept it as a culture thing, but I still can't be at ease with it, and I think it shows because now no one links her arms with mine anymore. So imagine the number of homosexuals I thought existed when I saw girls linking arms and holding hands, before knowing that it's just a cultural phenomenon. But I guess it's easier for gay Chinese to hide behind this phenomenon since the Chinese can brush this behaviour off as inherent intimacy amongst same-sexes. Easier, and yet all the more harder?

If advocating change in the rigidity of unquestioning status quo starts from schools, then I would say Fudan is doing a good job. Banned 2 years ago in Shanghai, the play ‘The Vagina Monologues‘ never saw light again until students from Fudan decided to take it in their own hands just last month. The hall was packed and they received standing ovation on both nights of their performance. The localized play and professionalism of the actresses certainly moved me, especially in the scene where two girls face condemnation from one of the girl's parents for challenging the heterosexual model (*sheepish smile*).

This brave group of students tried to perform in Shanghai University, but faced harsh criticisms barely a few minutes into the play (it starts off with many girls saying 'vagina' and echo each other for a whole minute). It was threatened to be discontinued, but fortunately an enlightened teacher helped them convince the upset obstructionist to let it go on. The doors to the theatre were locked, however, and latecomers were told that the play was cancelled.

There is an increasing relaxed attitude towards homosexuality in Shanghai, and Fudan appears to be one of the shepherds to guide the Chinese towards a diverse and progressive society.

3) China View’s news article on the banning of the stage drama ‘The Vagina Monologues’ in 2004.