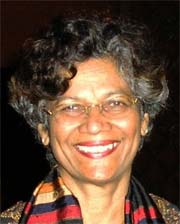 Ms. Constance Singam, current president of AWARE, Singapore�s leading advocacy group for gender equality, will shed some light on the place of queer women within the feminist movement. Where have we been?

She will speak about political and historical context, difficulties negotiating for respect and diversity, her personal experiences and the future.

Find out more about the feminist movement in Singapore and our part in it.

Constance is well-known for being an active and vocal social activist and feminist. She has two degrees in Literature, including an MA.

Her recent publications include �A History of the TWC: Building Social Space in Singapore� and the essay �Quietly Resisting; Silently Subverting: The Wayward Ways of Singapore Women� (Postmodern Singapore, Select Publishing). She was a co-editor of the book �Re-Presenting Singapore Women� (Landmark Publications).

Her social contributions were as Founding Member of TWC1, TWC2, and MediaWatch and as the Past President of SCWO.

AWARE is Singapore�s leading advocacy group dedicated to promoting gender equality and understanding. Since its inception in 1985, AWARE has brought women�s perspectives to national issues and has focused on Research & Advocacy, Educational Programs, and Direct Services.

AWARE seeks to identify areas for improvement in gender equality, encourage positive change and support women in realising their highest potential. It believes that gains made by women are not gains made at the expense of men. Rather, they are gains which benefit families and society as a whole.

AWARE is a not-for-profit non-governmental organisation and is funded solely by donations, grants, and member subscriptions.