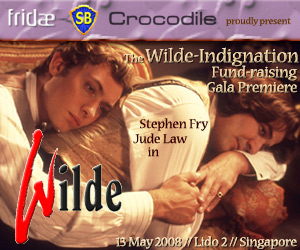 Fridae.com, in support of People Like Us� Indignation gay pride season, is organising the Singapore premiere of the film �Wilde� on Tuesday 13 May 2008, at the Lido theatres.

Directed by Brian Gilbert, this 1997 film tells the story of celebrated poet, novelist and playwright Oscar Wilde, who in 1895 was convicted of �gross indecency� under a UK law that was the precursor of Singapore�s infamous Section 377A. Wilde was a martyr to the moral hypocrisy of his time, and which unfortunately still lives on in Singapore.

The film was banned by the Singapore censors when first released. It has now been re-rated under revised film guidelines (post 2002 censorship review) as R21. 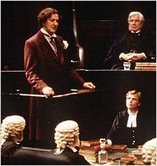 Fridae�s gala premiere is intended as a fund-raiser for Indignation, since Indignation events themselves (scheduled for August 2008) are traditionally free of charge, in order to be accessible to everyone. Tickets are priced at $20 (US$15) and $50 (US$38) – the latter includes a cocktail reception – and are available from Fridae�s movie site, or more directly from their tickets shop.

Crocodile men�s wear and Shaw theatres are the other sponsors and People Like Us would like to express our thanks to them and Fridae for their support.

Sayoni has been, and still is, a proud participant in Indignation over the years, and we would like to express our full support to this Gala Premiere.